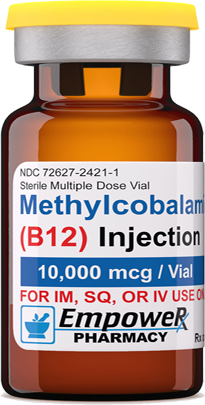 Product Details
General Information
Mechanism of Action
Pharmacokinetics
Precautions
Pregnancy
Breast Feeding
Side Effects
Storage
General Information
The most chemically complex of all the vitamins, methylcobalamin is a water soluble, organometallic compound with a trivalent cobalt ion bound inside a corrin ring which, although similar to the porphyrin ring found in heme, chlorophyll, and cytochrome, has two of the pyrrole rings directly bonded. The central metal ion is Co (cobalt). Methylcobalamin cannot be made by plants or by animals; the only type of organisms that have the enzymes required for the synthesis of methylcobalamin are bacteria and archaea. Higher plants do not concentrate methylcobalamin from the soil, making them a poor source of the sub- stance as compared with animal tissues.
Mechanism of Action

Vitamin B12 is used in the body in two forms, methylcobalamin and 5-deoxyadenosyl cobalamin. The enzyme methionine synthase needs methylcobalamin as a cofactor. This enzyme is involved in the conversion of the amino acid homocysteine into methionine which is, in turn, required for DNA methylation. The other form, deoxyadenosylcobalamin, is a cofactor needed by the enzyme that converts Lmethylmalonyl-CoA to succinyl-CoA. This conversion is an important step in the extraction of energy from proteins and fats. Furthermore, succinyl CoA is necessary for the production of hemoglobin, the substance that carries oxygen in red blood cells.

Vitamin B12, or methylcobalamin, is essential to growth, cell reproduction, hematopoiesis, and nucleoprotein and myelin synthesis. Cells characterized by rapid division (epithelial cells, bone marrow, myeloid cells) appear to have the greatest requirement for methylcobalamin. Vitamin B12 can be converted to coenzyme B12 in tissues; in this form it is essential for conversion of methylmalonate to succinate and synthesis of methionine from homocysteine (a reaction which also requires folate). In the absence of coenzyme B12, tetrahydrofolate cannot be regenerated from its inactive storage form, 5-methyl tetrahydrofolate, resulting in functional folate deficiency. Vitamin B12 also may be involved in maintaining sulfhydryl (SH) groups in the reduced form required by many SH-activated enzyme systems. Through these reactions, vitamin B12 is associated with fat and carbohydrate metabolism and protein synthesis. Vitamin B12 deficiency results in megaloblastic anemia, GI lesions, and neurologic damage (which begins with an inability to produce myelin and is followed by gradual degeneration of the axon and nerve head). Vitamin B12 requires an intrinsic factor mediated active transport for absorption, therefore, lack of or inhibition of in-trinsic factor results in pernicious anemia.

Methylcobalamin is administered intranasally, orally, and parenterally, while hydroxocobalamin is administered only parenterally. Once absorbed, vitamin B12 is highly bound to transcobalamin II, a specific B-globulin carrier protein and is distributed and stored primarily in the liver as coenzyme B12. The bone marrow also stores a significant amount of the absorbed vitamin B12. This vitamin crosses the placenta and is distributed into breast milk. Enterohepatic recirculation conserves systemic stores. The half-life is about 6 days (400 days in the liver). Elimination is primarily through the bile; however, excess methylcobalamin is excreted unchanged in the urine.

Intramuscular Route Specific Pharmacokinetics: Bioavailability of the nasal gel and spray forms relative to an IM injection are
about 9% and 6%, respectively. Because the intranasal forms have lower absorption than the IM dosage form, intranasal B12
forms are administered once weekly. After 1 month of treatment in pernicious anemia patients, the once weekly dosing of
500 mcg B12 intranasal gel resulted in a statistically significant increase in B12 levels when compared to a once monthly 100
mcg IM dose.

Who should not take this medication? Patients with early hereditary optic nerve atrophy, cyanocobalmin hypersensitivity, and
those who are pregnant. Your health care provider needs to know if you have any of these conditions: kidney disease; Leber’s
disease; megaloblastic anemia; an unusual or allergic reaction to methylcobalamin, cobalt, other medicines, foods, dyes, or
preservatives; pregnant or trying to get pregnant; breast-feeding.

Methylcobalamin, vitamin B12 preparations containing benzyl alcohol should be avoided in premature neonates because ben-
zyl alcohol has been associated with ‘gasping syndrome,’ a potentially fatal condition characterized by metabolic acidosis and CNS, respiratory, circulatory, and renal dysfunction. Vitamin B12 deficiency can suppress the symptoms of polycythemia vera.
Treatment with methylcobalamin or hydroxocobalamin may unmask this condition.

Certain conditions may blunt or impede therapeutic response to methylcobalamin therapy. These include serious infection,
uremia or renal failure, drugs with bone marrow suppression properties (e.g., chloramphenicol), or concurrent undiagnosed
folic acid or iron deficiency anemia. The mechanism appears to be interference with erythropoiesis. Patients with vitamin B12 deficiency and concurrent renal or hepatic disease may require increased doses or more frequent administration of methylcobalamin.

Clinical reports have not identified differences in responses between elderly and younger patients. Generally, dose selection
for elderly patients should be done with caution. Elderly patients tend to have a greater frequency of decreased hepatic, renal,
or cardiac function, and also have concomitant disease or receiving other drug therapy. Start with doses at the lower end of
the dosing range.

Parenteral methylcobalamin is classified as pregnancy category C. Adequate studies in humans have not been conducted;
however, no maternal or fetal complications have been associated with doses that are recommended during pregnancy, and appropriate treatment should not be withheld from pregnant women with vitamin B12 responsive anemias. Conversely, pernicious anemia resulting from vitamin B12 deficiency may cause infertility or poor pregnancy outcomes. Vitamin B12 deficiency has occurred in breastfed infants of vegetarian mothers whose diets contain no animal products (e.g., eggs, dairy), even though the mothers had no symptoms of deficiency at the time. Maternal requirements for vitamin B12 increase during pregnancy. The usual daily recommended amounts of methylcobalamin, vitamin B12 either through dietary intake or supplementation should be taken during pregnancy (see Dosage).

Methylcobalamin is distributed into breast milk in amounts similar to those in maternal plasma, and distribution in breast milk
allows for adequate intakes of methylcobalamin by breast-feeding infants. Adequate maternal intake is important for both the mother and infant during nursing, and maternal requirements for vitamin B12 increase during lactation. According to the manufacturer, the usual daily recommended amounts of methylcobalamin, vitamin B12 for lactating women should be taken maternally during breast-feeding (see Dosage). The American Academy of Pediatrics considers vitamin B12 to be compatible with breast-feeding. Consider the benefits of breast-feeding, the risk of potential infant drug exposure, and the risk of an untreated or inadequately treated condition. If a breast-feeding infant experiences an adverse effect related to a maternally ingested drug, healthcare providers are encouraged to report the adverse effect to the FDA.

In most cases, methylcobalamin is nontoxic, even in large doses. Adverse reactions reported following methylcobalamin administration include headache, infection, nausea/vomiting, paresthesias, and rhinitis. Adverse reactions following intramuscular (IM) injection have included anxiety, mild transient diarrhea, ataxia, nervousness, pruritus, transitory exanthema, and a feeling of swelling of the entire body. Some patients have also experienced a hypersensitivity reaction following intramuscular injection that has resulted in anaphylactic shock and death. In cases of suspected cobalt hypersensitivity, an intradermal test dose should be administered.